RiverCourt Residences sits on the scenic banks of the Squannacook River in the village of West Groton. This site has played a key role in the industrial development of the Nashoba River Valley. Some speculate that the site was occupied as early as 1744 (more than 250 years ago!). But the area, once known as “Tarbell Mills”, was in use by 1765. Taking advantage of the water power supplied by the Squannacook, locals developed a variety of enterprises including a saw mill, dye house, wood carving mill and a grist mill, important uses that complimented the agrarian nature of the Town of Groton.

In 1875, a strawboard mill was built in the place of the original grist mill and soon thereafter production switched to leatherboard (a predecessor to dry mat, a material used in printing processes). This is reputed by many proud local historians to be the first leatherboard manufactured in the United States. By 1890, thirty-five employees generated about four tons daily!

Prior to the turn of the century, the Groton Leatherboard Company was incorporated, and further expanded its’ business to include counter-boards, shank-boards, chair board, friction boards and heel boards. The wooden framed building was destroyed by fire in 1914 but by 1916 a red brick mill building stood in its’ place. As business expanded (dry mat production began in 1924), so did the mill complex, and in fact it is the only such set of buildings left intact in the Nashua River Valley.

The Groton Leatherboard Company, locally owned and managed throughout its’ history, finally closed its’ doors in 1975. Within a couple of years it became home to the Nielsen Molding Company, a producer of picture frames. Ultimately the building was shuttered and turned over to the Town of Groton.

It was 1997 when Capstone Properties began talks with the town about renovating the historic mill into an assisted living community for area seniors. With support from Groton and neighboring Ayer, RiverCourt Residences has been refurbished to incorporate historically significant features such as its’ welcoming entryway and its’ expansive windows as well as state-of-the-art amenities designed specifically for seniors. Opened in January 2002, RiverCourt, managed by Welch Healthcare and Retirement Group, offers a range of Senior living options which include Independent Living, Assisted Living, Memory Care and Respite Stays.

Just as the Squannacook River rolls by, so flows the history of the village of West Groton. The owners and staff of RiverCourt Residences are proud to be an integral part of the region’s rich heritage. 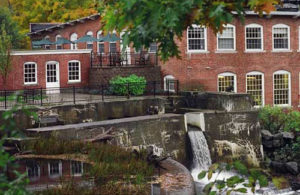